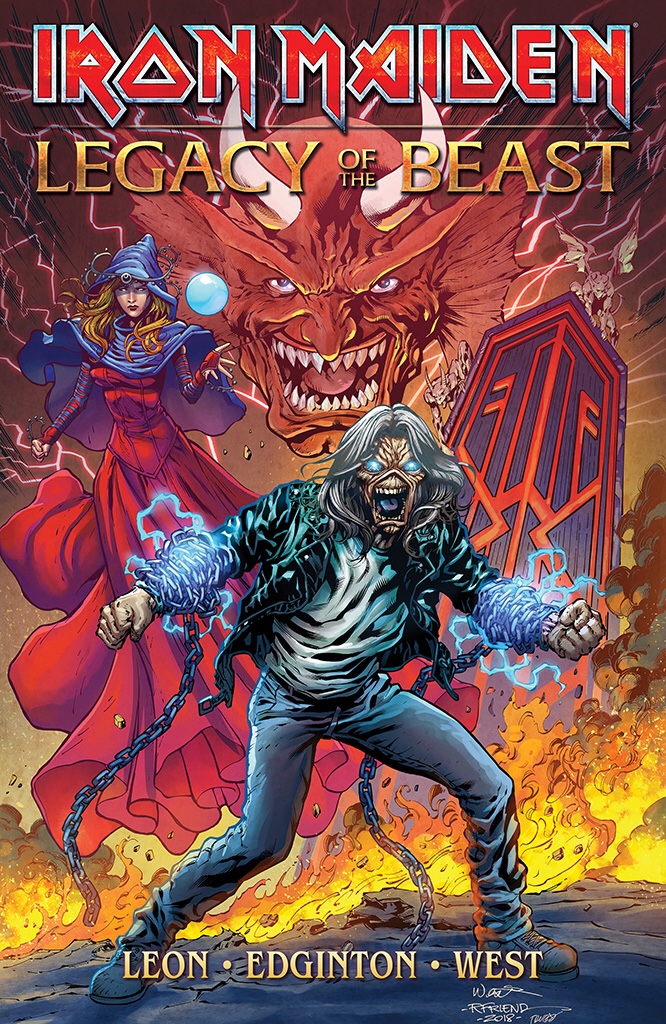 Legacy of the Beast is based on the popular mobile rpg of the same name. Those who are not familiar with Iron Maiden will be impressed by not only their dedication to British music within the heavy metal genre at the beginning of the N.W.O.B.H.M (New Wave
Of British Heavy Metal).Their colourful history with powerful metal songs and of course, their mascot, Eddie. Eddie is pictured on almost every Iron Maiden album cover throughout their music history. Eddie, initially was nicknamed Eddie the Head because
rumour was said that Eddie was inspired from a decapitated head from a terrible military battle.
Anyway, Fast forward to the present day. Eddie is a strong protagonist and a larger than life character so I can see why he plays the main protagonist within the pages of Legacy of the Beast.
Dark forces conspire to corrupt and infest the reality, Eddie’s shattered soul is catapulted across the cosmos. He pushes his weakened self through time and space to battle various Iron Maiden inspired characters in a spiral of twisted realities to bring order to the broken realms while gathering various shards along the way.
The story is a collective and entertaining page turner which pulls you from the very first page and you’re taken into various worlds such as the underworld which is inspired from Iron Maiden’s classic 1982 musical masterpiece, The Number of the Beast towards the distant future of the Final Frontier. The atmospheric elements within the chapters pays homage to Iron Maiden in some form, whether its the characters like the Clairvoyant, Horus or from the heart- pounding and entertaining story which is superbly written by Llexi Leon and Ian Edginton. The Legacy of the Beast compiles issues one to five with stunning cover artwork and variants from the likes of Tom Fleming, Santi Casas, Navigator Games, Ted Kim, Luis Royo, Mark Englert and Akirant.
The Legacy of the Beast is a must-have for the avid rocker, gamer, basically anyone who enjoys an awakening of dark surprises through a spiralling adventurous journey into hell.