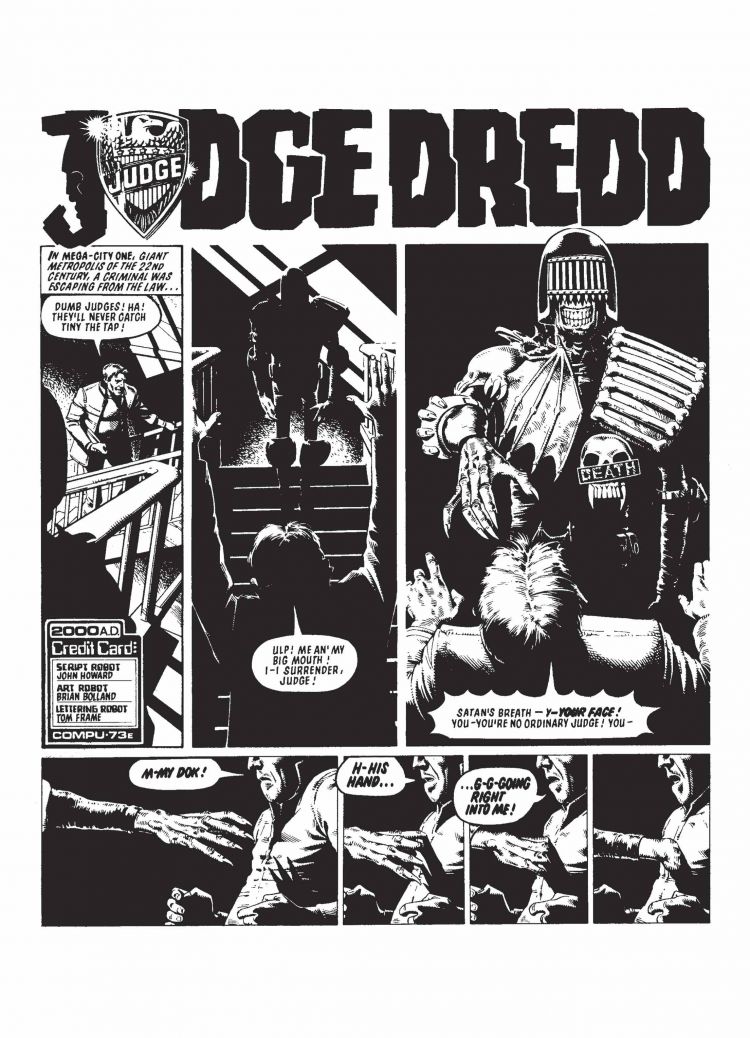 Of all the many adversaries Judge Dredd has faced during his years policing Mega City One, none has proven as memorable, persistent or as terrifying as the malevolent super-fiend, Judge Death. Death first stalked the streets of the city back in 1980 (that is, 2102 in Dredd’s world), making an immediate impact on both 2000AD readers and Mega-citizens alike.
“My name iss Death. I have come to judge you,” he said to his victims, effortlessly clawing his way through victims’ bodies like they were “custard”.
“You cannot kill what does not live!” he continued with flawless logic, as he resisted the Judges attempts to shoot him. “I have come to bring law to this city! My law – the law of Death!”
“My Grud, Dredd, what kind of monster is this?” exclaimed one alarmed judge as the terrifying figure proceeded to burn someone to death before apparently turning into a transparent ghost and escaping. What kind of monster indeed?

We soon learn Judge Death has crossed over from another dimension, where life itself is judged a crime. His initial reign of terror is short-lived, however, ending after three episodes, a final caption reading:
“The menace of Judge Death would never again be let loose upon the Mega-City.”
In fact, this was just the beginning. The notion of creating an antithesis to Judge Dredd (who had started his own adventures in 1977) had arisen from a conversation between Dredd writers John Wagner and Alan Grant during a stay in an Essex farmhouse. What really brought the concept to life, so to speak, however, were the inspired visuals by artist Brian Bolland.
Although it’s not obvious, Bolland credits another 2000AD artist’s work as crucial in inspiring the villain’s unique appearance.
“I think Judge Death’s got a very strong Kevin O’Neill influence,” he says of the Nemesis the Warlock artist. “It’s not the sort of look that would have popped automatically out of my head.” Producing the art for the first story (which was scripted by Wagner using the pen name, John Howard) was a very slow process. Bolland took months to produce 15 pages. But the results were definitely worth it.
“When the pages came in they would be marvelled at – the whole office would come to a standstill,” recalled then 2000AD editor Steve MacManus. “When you could see the script and art come together, it became evident how well Brian told the story. He always put the story first, but also managed to get some great pictures in there.”
Bolland returned to produce Judge Death Lives with Wagner and Grant in 1981, this time creating three new allies for the villain, the Dark Judges: Fear, Fire and Mortis. Bolland’s work was as slow but satisfying as before, using a sheep’s skull he had found in the Lake District as the basis for Mortis. Fear’s terrifying features were largely concealed meanwhile, while Fire was merely a fiery outline which was quicker to draw. The story was a big success. Sadly, however, Brian Bolland subsequently left 2000AD becoming one of many British talents to take more lucrative work across the Atlantic.

Death and the maiden
One major feature of the early Judge Death stories was the introduction of Judge Cassandra Anderson: the first story had, for example, ended with Death being trapped inside the PSI Judge’s head. A lively, more attractive figure than “Old Stoneyface” Dredd (Bolland had modelled her on Blondie musician, Debbie Harry), in 1985, the psychic judge finally got her own strip, Anderson Psi-Division. The first story
drawn by the late Brett Ewins and Cliff Robinson was one of a number of Anderson strips to feature Judge Death and the Dark Judges again wreaking carnage on Mega City One. “The crime isss life! The sentence isss death!” Indeed. 1990, however, saw Judge Death, the Dark Judges and the new Sisters of Death wreaking a truly apocalyptic onslaught on the populace of Mega City One in Necropolis (“Thoossse about to die, we sssalute you!”). Death has enjoyed all manner of adventures since, notably appearing in the first celebrated Judge Dredd and Batman crossover graphic novel, Judgement on Gotham, produced
by John Wagner, Alan Grant and Simon Bisley in 1991. In a sign of the times, Bisley admits to modelling his Judge Anderson less on Debbie Harry, more on Tori Amos, continuing the noble tradition of artists modelling the Psi division judge on whoever they happened to fancy that week.

Whoops! Necropolis
At the same time, Judge Death provided one of the star attractions in the newly launched Judge Dredd The Megazine. Young Death related the story of Judge Death from the very start as told by the villain himself to interviewer Brian Skuter (“An origins. Wow,” as the luckless Skuter notes). Inside, we learned much: that Death’s given name was Sidney, that his father worked as a particularly sadistic dentist and Death himself was endlessly cruel to his childhood dog “Woofie”.
Although very entertaining, the story (which was illustrated by Peter Doherty) did rather shatter Judge Death’s aura of menace. Wagner and other writers have worked hard at correcting the impact of Young Death’s humorous content ever since. Subsequent stories have seen him destroying Las Vegas and sending Judge Anderson into a coma.

Life after Death?
What does the future hold for Judge Death? Unlike most of Dredd’s foes who are, after all, usually dispatched within one story, Judge Death can return after being defeated again and again and again. His long-term prospects, indeed, are probably better than those of mere mortals like, say, Cass Anderson and
Joe Dredd. In truth, Judge Death probably needs Judge Dredd just as much as Dredd needs him. Death is a distorted mirror image of Dredd, his perverted philosophy (essentially, as all crime is committed by the living, life itself should be a crime) essentially just a more extreme version of Dredd’s own (“Justice has a price. The price is freedom”). Woody Allen has observed, that the whole of humanity has been sentenced to death for a crime it didn’t commit. Judge Death just takes things a stage further. At any rate, his own future looks bright.
After all, as someone once said: you cannot kill what does not live!

Read more articles like this when you become a Friend of ComicScene here. It only costs £20 for the year and you get access to our digital library and get ComicScene Weekly PLUS a free book when you join! Click the button below!