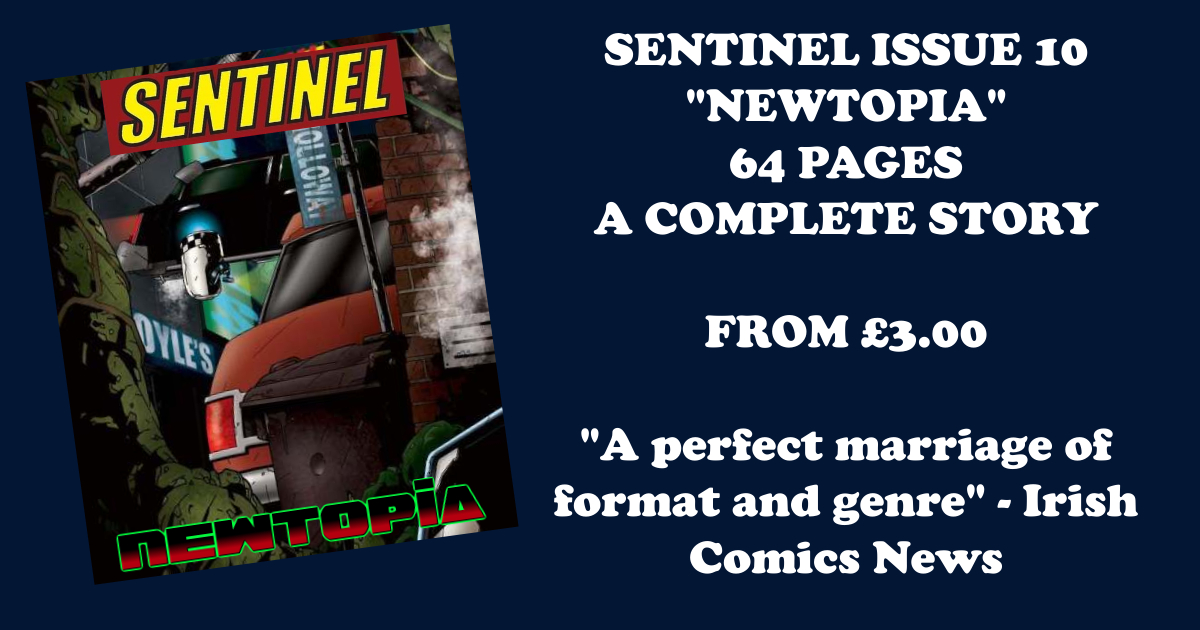 Sentinel, the UK indie that has made a valiant attempt to recreate the joy of reading Starblazer back in the eighties, has launched a Kickstarter Campaign for it’s tenth issue in two years, impressive when you realize that each issue contains a complete sixty four page story (at least) for just four quid. It’s like the Commando pocket comics, but with stories based in science fiction, horror and fantasy, featuring the cream of UK indie art talent.

This particular issue sees the creative team of writer Alan Holloway and artist Dave Metcalfe-Carr (his first issue) take on yet another genre, as “Newtopia” sees Sentinel go all noire, with the story taking place over a wind swept night in a future city where danger lurks around every corner.

“I asked and they said yes,” says Dave when asked how he got into the Sentinel artists bullpen, joining the likes of Andrew Richmond, Sinclair Elliott and Neil Sims. “I’d got the first issue and fancied having a crack at something different so I contacted Alan and offered my services. Thankfully he and Ed said yes.”

“We are happy to give anyone a shot,” says Alan, who founded the comic along with artist Ed Doyle, and writes every issue. “Dave is a great artists with his own style, and when I asked what sort of thing he’d like to do he said he liked Noir type stories, so I wrote Newtopia for him, which was an extension of a story sent to The 77 quite a while back, now fully fleshed out.”

“The script appealed to me because it was close enough to what I do but different enough to give me the challenge I needed,” states Dave.” It also appealed because Alan writes for artists. The script was about 20 pages long but the issue is 64 pages. He just let’s artists draw.”

“I’d love to do another Sentinel,” he continues. “Not only is it a great little book but the creative team are just that, a team and we look after each other. I think there’s at least a years worth of issues being drawn at the minute so it might not be for a while though.”

” I’ve got no problem working with Dave again,” Alan confirms. “He did great work on this issue, plus he’s a really fun guy with a mad sense of humour that fits in well with mine. I’ve floated a future issue that would mix up African vampire folklore with the U.S civil rights movement. It will be a very mature issue, dealing with real events and people, so will be important to get it right.”

In the meantime, Dave has his hands nice and full with other projects, as you’d expect from an artist who has been in the UK scene since the early 90s. “My main project at the minute is England Made Me,” he explains. “It’s a comic about growing up in the 70s and 80s. It’s full colour which is a challenge as I’ve only done 2 page colour strips before and has a fantastic back up story by Rol Hirst and Paul Barlow who I’ve know and worked with for just short of 30 years. I’ve also got a strip I’m working on for Paragon who I’ve done several bits and bobs for in the past.”

“Myself and Ed are beyond amazed that we’ve managed ten issues in two years,” says Alan. “There’s been a little pushback from the more bitchy side of fandom, but we’ve had great reviews from the press and have plenty of fans who enjoy what we do. No one at Sentinel does this for the money – we do it because we love comics. Artists join us because they like the product and the writing, and that’s the highest compliment we could ever ask for. You have to big yourself up in terms of pushing the comic and trying to get each issue funded, but aside from that there’s no egos here, just comic fans making what I can only call a brilliant comic, and if you think that’s boastful I could care less – it’s exactly what I think of the comic and would be the same if I wasn’t involved. I’m genuinely jealous of those who get to read each issue at publication, as I’ll never have that pleasure – by the time it comes out I’ve read each one a dozen times.”

“If you like comics,” he finishes, “then you’ll like Sentinel. No need to wait for the next installment, no need to have every issue. A complete, fresh story over 64 pages. It’s a rush, and all the team asks if you give it a chance so maybe you’ll enjoy reading them as much as we enjoy making them.”