45 years and not out is quite the achievement in British comics, or any comics for that matter. While 45 isn’t perhaps as significant as 40, or 50, it is still something definitely worth celebrating . For this latest 2000AD milestone, Rebellion  wants to make a big noise , and are releasing a number of collections that ride on the back of it including, collections of work from Carlos Ezquerra and, John Wagner, a 2000AD related art book (collecting a mix of new art and collected pin ups for artists not usually associated with), and a collection of the serialised 2000AD Encyclopaedia under a quite wonderful cover by Stewart K Moore. Finally there is a weekend of 2000AD related online events, panels and Q&A sessions (on Mother’s Day – thanks Rebellion) to celebrate, covering a variety of topics with contributions from some very high profile contributors to the House of Tharg.

2270, the anniversary Prog itself, is a Brian Bolland heavy card stock covered bumper issue. Strangely, rather than a “complete” jumping on issue, it has 3 strips that are reaching the mid point in their runs. An odd decision on the face of it, but pulling a weekly comic together must be an  unholy task at the best of times, and to try and schedule in line with an anniversary must be nigh on impossible.

The main draw will be the return of John Wagner to Judge Dredd, alongside frequent collaborator and rising star Dan Cornwell, sympathetically coloured by Dylan Teague. “Citadel” promises more world shaking revelations from the “Apocalypse War”. It’s quite something that a story 40 years old will still have ramifications for Dredd and MC1 – hopefully that particular well hasn’t run dry. The more cynical among the readership now see Dredd purely as a house character, and it seems unlikely that any change will be permanent. Still, with Wagner and Cornwell at the helm, you can be pretty confident it will be an enjoyable ride.

Proteus Vex is reaches a mid point, always bonkers and occasionally hard to follow, but rewards investment. God like genius that he is, Henry Flint’s replacement on the strip Jake Lynch has made the strip his own with this serial, as esoteric, imaginative, surreal and dynamic as the strips co creator without slavishly following Flint’s style. Definitely one that warrants rereading in a collection, writer Michael Carroll and Jake Lynch have become assets to the Prog.

A one off Indigo Prime by Kek W and Lee Carter trails a new series. The creative team clear the decks in a reboot and (re) introduce an old 2000AD character, with ties to the series. Tharg seems to favour the reintroduction of 2000AD characters in series that whose time is spent, like  the completely unnecessary  introduction of Revere in the last (and previously thought of as being, final) Indigo Prime and Armoured Gideon popping up  in “The Order”. Tharg, please stop. Lee Carter’s art is atmospheric and beautifully coloured, but the script suffers from co creator’s John Smith’s tendency to the cryptic. 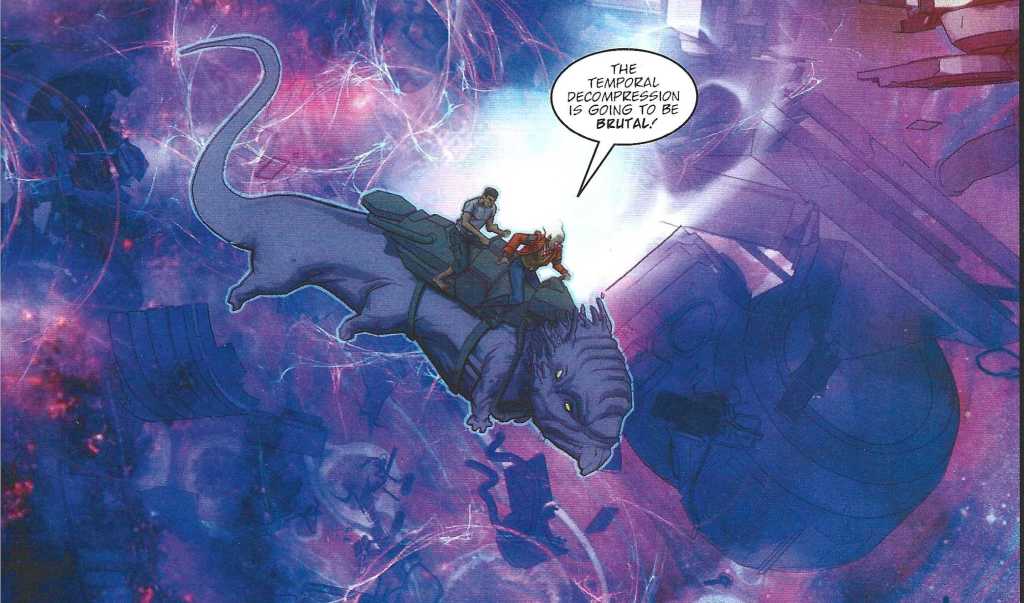 Ian Edgington and Lee Gallagher’s Kingmaker on the other hand, is far more straightforward.  Set on a world of orks and wizards and elves invaded by a hi tech alien race, it’s like a mash up of Independence Day and Lord of the Rings, but better than that. Edginton balances humour with great character building and action in the script, and it beggars belief why Gallagher isn’t more widely known. This is fun comics.

The customary Tharg strip is this year written by David M Barnett, drawn by ex art editor Robin Smith. It’s refreshingly whimsical in comparison with the rest of the Prog, hitting all the beats of paying homage to the history of The Galaxy’s Greatest, but  more miss than hit,  Barnett is one to watch, but although the contribution from Robin Smith is a nice call back to previous eras of 2000AD, sadly his work looks stiff and anachronistic compared to the other artistic contributions in the Prog.

Kek W’s other contribution this week is “The Order”, the baffling tale of a secret society fighting the threat of interdimensional “wyrms”. Every episode contains plenty of drama and action but with no clear direction as to as to what is going it just becomes noise. It’s dazzlingly illustrated by the master that is John M Burns. So, if nothing else, it looks lovely.

Finally, the latest book of Brink begins. “Mercury Retrograde” introduces completely new characters in events that hark back to the beginning of the strip. Slow burn is an overused but completely apposite description for this strip. Don’t expect instant thrills, but if previous books are to go by, readers’ patience and perseverance will be well rewarded, Abnett and Culbard have devised a latter day Prog classic.

All in all, a bit hit and miss for an anniversary Prog. If nothing else it is a perfect showcase for the variety and talent that 2000AD continues to provide. Roll on the 50th.