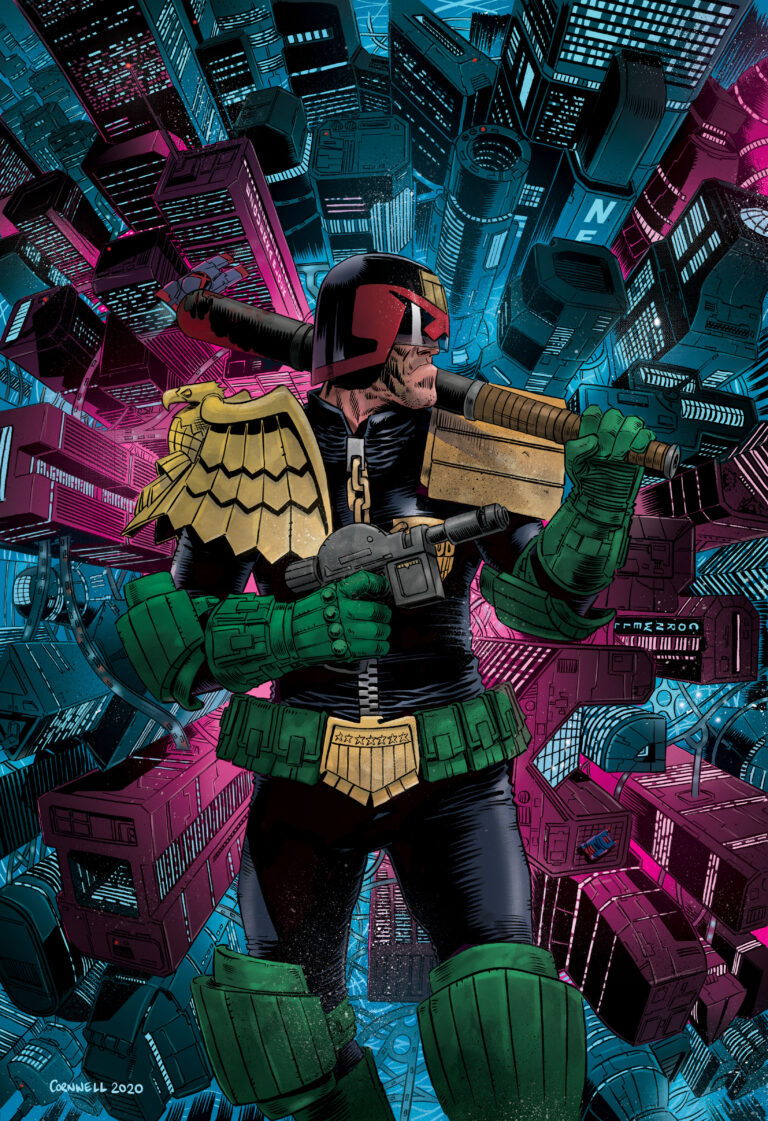 Issues of 2000 AD and the Judge Dredd Megazine, and our new graphic novels are available to order from comic book stores from Diamond Distribution’s Previews magazine, which is out now!

If you want to order any of these titles through your local comic book store, you must place your order by 24th December!

Incredible SF action from the Eisner-nominated UK anthology! In Progs 2217-2219, there’s dragon battles in the sky for Celtic warrior Slaine in ‘The Web of Weird’ by Pat Mills and Leonardo Manco; Durham Red fights for her life in ‘Served Cold’ by Alec Worley and Ben Willsher; Hershey risks becoming ever more twisted in her desire for justice in ‘The Brutal’ by Rob Williams and Simon Fraser; Proteus Vex is caught in a conflict in ‘The Shadow Chancellor’ by Mike Carroll and Jake Lynch; and there’s more future law enforcement with Judge Dredd!

Prog 2220 is the first of 2021’s 48-page Regened issues, the all-ages specials featuring both new and old characters. Cadet Dredd tackles another case, we meet the heroes of SF extravaganza Action Pact, learn about Mega-City One’s most notorious cat-burglar, and more!

More action and adventure in the future-shocked world of Judge Dredd! A mystery woman has a connection with Dredd in ‘Destiny’s Child’ by Ken Niemand and Simon Coleby; Rico and Jara meet the reclusive Fargo in ‘Megatropolis’, by Ken Niemand and Dave Taylor; Judge Death gives his lieutenants Fire, Fear and Mortis new bodies in ‘Deliverance’ by David Hine and Nick Percival; ‘Dreadnoughts’ by Mike Carroll and John Higgins reaches its explosive finale; and the house gives up its secrets in The Returners: ‘Heartswood’ by Si Spencer and Nicolo Assirelli! Plus there’s interviews, features and more – and in the bagged mini-trade, reality goes amok in Judge Dredd: Traumatown by Mike Carroll and Nick Percival!

The best-selling Judge Dredd graphic novel series continues with the most popular crossover story in its history – a tussle with xenomorphs from Ridley Scott’s Alien film franchise!

Mega-City One – a nightmarish enclosure located along the Eastern Seaboard of North America. Only the Judges – powerful law enforcers supporting the despotic Justice Department – can stop total anarchy running rife on the crime-ridden streets. Toughest of them all is Judge Dredd – he is the law and these are his stories…

Judge Dredd has brought countless monsters to justice but now the ultimate killing machines, cinema’s most famous xenomorphs, surface in Mega-City One and it may well be more than the Justice Department can handle!

In Night of the Devil, take a hallucinatory trip through the oppressive heat of the Burmese jungle along with British soldiers engaged in desperate skirmishes with the enemy. In Bayonet Jungle, Private Jack Green’s presence is seen as an omen of bad luck but he struggles to prove himself to the experienced soldiers of Third Platoon as they fight against the Japanese army that surrounds them.

Louis Crandell was but a lowly lab assistant with a prosthetic, steel hand until an experiment gone awry results in a horrific explosion. Surging with electric charge which bestows Crandell the power of invisibility with the exception of his steel hand, so commence a series of uncanny thrills!