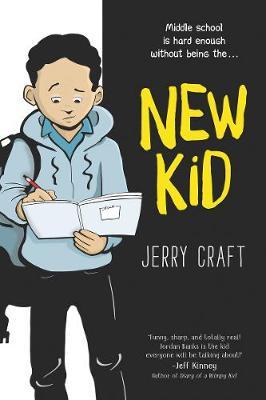 The American Library Association has announced a graphic novel has won the John Newberry Medal Award for the first time in 100 years.  New Kid by Jerry Craft, published by Harper Collins, was named at the Youth Media Awards for most outstanding contribution to children’s literature.

“New Kid is a distinct and timely story,” said Newbery committee chair Krishna Grady. “Respectful of its child audience, it explores friendship, race, class and bullying in a fresh and oftentimes humorous manner. We let the criteria leads us in all of our discussions and it lead us to New Kid. It is individually distinct. It is simply put a ‘distinguished contribution to American literature.”

Meanwhile in the UK at the Arts Foundation Future Awards 2020 last night Esther McManus was announced as the winner of the Comics Category Award by comics laureate Hannah Berry.

Finally when it comes to masterclasses in comics the Guardian have announced a Masterclass with comic comic creator Kieron Gillen in London on Wednesday 5th February.  Details can be found here.

Congratulations to all the winners from ComicScene Magazine.

ComicScene is available in newsagents in the UK, Ireland, Australia, Canada and the United States.  This website is supported by magazine sales.  Please subscribe in print or digital here.